I'm really pleased to have received performance figures for an evacuated tube solar water heater system from Duncan, as it provides an excellent opportunity to see the results in mild climate conditions.

Looking at the graphs below, the average monthly power consumption to heat water for the three years of measurements taken between June 2007 and May 2010 was 50 kwh, which compares favorably to the non-solar average of 114 kwh per person (source: HEEP) in Wellington New Zealand. 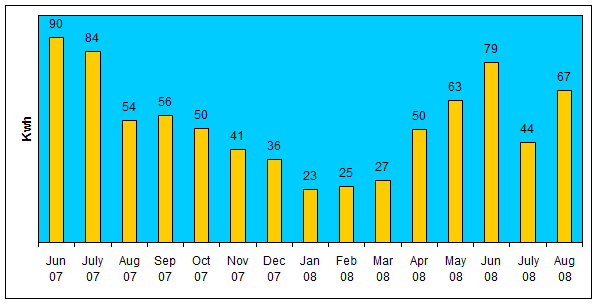 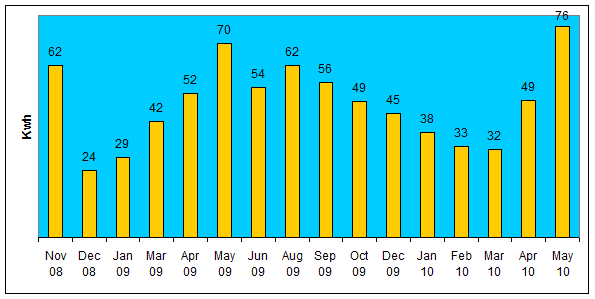 As expected, the solar system performed the best during the summer months from December to February, going down to as low as 23 kwh per month in January 2008. Multiply that by the amount you pay per kwh where you stay, and you will see just how little that is for water heating in a month.

During the winter months the lowered efficiency causes the backup element to work harder, peaking in the months May to July with the highest consumption of 90 kwh in June 2007.

To sum up, the performance of this evacuated tube solar water heater is good considering the climate it operates in. If you installed a similar unit in Wellington NZ you could realistically expect to lower your water heating bills by more than half.

To get a rough idea if the performance would be better or worse where you live, find out what the solar insolation is at your location.

Duncan custom built his own energy monitor using a Picaxe microcontroller, which records using a current clamp when the heating element of the hot water cylinder turns on or off, accurate to within 30 seconds.

This is a very effective way to track the power consumption of an evacuated tube solar water heater backup element. Here are some commercial energy monitors that can be used to accomplish the same thing.

Duncan had a 30 evacuated tube solar water heater installed instead of the more commonplace 20 to compensate for the loss of efficiency in having the collector facing north west.

Find out which are the top 3 evacuated tube solar water heaters in various areas of the world.